I have conflicting feelings on writing after a long period of inactivity.

I'd say that for the most part, the writing itself suffers but sometimes a long break is good for editing. What I mean to say is that if you try to write after a long period of vegging, you might suddenly feel ineffectual and it's as if you've forgotten what the hell a keyboard is and how to type. Not literally, but more than once I've come back to my blog or manuscript after not touching it for a week or longer and just kinda stared at the screen for 20 minutes like 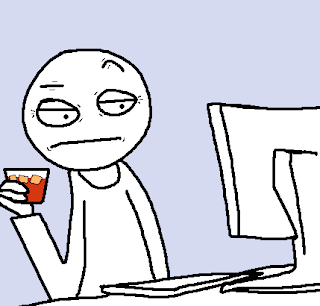 In some sense it's easy to say that writing is a akin to riding a bike, and that once mastered you never forget, but there's a big caveat to this. I'd say it's more like exercising and if you stop for a while, it becomes increasingly difficult to pick up where you last left off. Of course, after a week or two of adjustment you might be back at writing with the same quality you were able to before, but the longer you procrastinate writing the longer it takes to readjust. But there are some cases where deliberately taking a break from writing is beneficial; although I'd say the key to this is not taking a break from all writing, rather just from writing one specific project.

Meaning that you might stop working on one thing for a few days or so, but you still continue to write other things, that way you're still keeping your writing skills sharp but not overdosing on one specific project. This sense of "writing overdose" occurs when you work on one project for so long that you struggle to write anything else. I've experienced both edges of this blade; there have been instances where I've dived deep into my manuscript rabbit-hole and by the time I came out the other end, I've become so entrenched in my story that I didn't know how to write anything else, but right now it's the exact opposite, where I've been mostly just writing articles for Exclusively Games (I've written several articles for them, which will show up on their website in a few weeks, starting with one juicy one about Amazon and followed by an op-ed about Dark Souls) and the occasional blog post. But now when I try to work on my manuscript everything goes to shit, because I've spent too much time writing other things and not enough time working on my story, so now I find it difficult to write for more than 20 minutes without feeling some form of mental fatigue setting in.

Obviously I'm not abandoning the story or anything, just wrestling with the Dark Lord, Procrastination, my primordial mortal enemy. But I don't feel like fighting him today, maybe tomorrow. We'll let Future Dylan worry about that.

Anyway it's reached a point where I spend 20 minutes reading and re-reading a single paragraph from my manuscript only to add or remove one single line, and then I just sit there smug and content like

So that's what you have to be careful about. Although deliberately taking a break when editing can be a Godsend. When you spend too much time reading and re-reading something you wrote, you build a sort of tolerance to it and stop seeing it through the objective lens needed to spot mistakes and continuation errors. But I often find when returning to something I wrote a long time ago that I largely forgot about what I wrote and how I wrote it, so reading it again after a long time of not touching it allows me to see it through fresh eyes, as if I'm seeing it for the first time, and it's much easier to spot mistakes and faux pas than when I'm actively working on editing and revising something for a long period of time.

It's also helpful to have another pair of eyes looking over your project for that sort of stuff while you write something else, that way you can still be making progress on editing / revising one project while writing another. For example, I think it's a good idea to start writing one book while nearing the final stages of editing another. If you're on your third or fourth draft of your story, passing it on to your beta readers and editors again while you start writing a new IP is a great way to stay fresh in the creativity zone while not letting mental fatigue set in.

Personally, I've gone an odd route and written both book one and book two of Desolation's Reach in a row, so after book one is published I'll probably write my next manuscript The Pen Pal while editing book two of Desolation's Reach, I think editing your past project while writing the new one is a good way to keep both writing and editing skills sharp. When I first started editing book one ages ago I had no idea where to start since it was my first time editing anything for who knows how long (although I find that the first page is usually a good place to start).

Not sure how to send off this post so I think I'll just cut it here.

and I'll see you in the next post.
Posted by Dylan Devine at 2:18 PM