I have no words to describe how furious I am. After working on a new blog post for the last 4 hours, for whatever reason the Blogger gods have decided to take it all away. Despite me religiously and obsessively saving every 10 seconds, for whatever reason the website decided, "Nah, just delete it all." I came back to this draft only to find the text box blank and hours of progress gone. 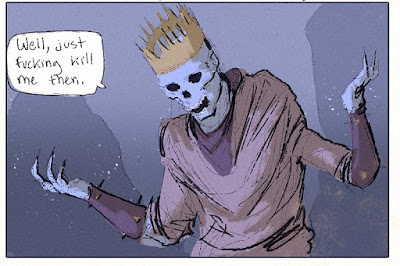 It was probably one of my best essays yet and that just fills me with more unbridled rage. Morale is low. My spirits aren't just down in the dumps, they're at the bottom of the landfill and have given up on trying to claw their way out. Like a person who was buried alive running out of oxygen in their coffin and resigning themselves to their fate.

My willpower is waning. It will likely be a week or longer before I muster up the courage to attempt writing the essay again. Mostly out of fear of Blogger Alt+F4-ing it for no F-ing reason, but also because I'm not entirely confident in my ability to recreate the essay with the same quality the original had. It really was lightning caught in a bottle, and now I don't know how well it would turn out if I rewrote it at this point.

Even if I manage to rewrite the whole thing, it might look less like a quality essay and more like the hollow shell of an essay that was murdered, had its corpse thrown into a wood chipper, and then was revived with necromancy.

This is Dylan, angrily signing off.