Life of a Writer Update: The Quest for the Oculus Quest

Don't worry, I haven't devolved into just making updates, but the essay I'm working on is a biggie (aren't they all?) so it'll be awhile before it's ready. In the meantime, let me regale you with my sad tale.

My tale begins this morning, this the 31st of June, but one day before August, the month named after Augustus, one of the people we can blame for the calendar being screwed up, the other being Julius, of whom July was named, for without them, December--which begins with the prefix "dec-", which means 10, would have been the 10th month, correctly, and not the 12th, which makes no fucking sense. At least one of them was stabbed for the time-measuring chaos they caused in their vanity, which I've heard is endless, but I would have preferred if Augustus got what was comin' to him too.

Anyway, all obtuse rants about the failures of calendars aside, I was given 2 days off after working nine 12-hour night shifts in a row without any break (that was 84 hours of working for the first 7 days of that, holy shit), and once I saw my pretty decently sized paycheck, since working 44 hours of overtime tends to lead to that, I decided to give myself a small reward by spending a few hundred on a VR headset.

This one, to be exact: 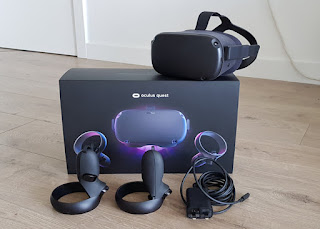 But since I had to go back to work after one more day, likely for another week--or weeks in a row, without any days off because I'm a slave, I wanted to try to buy a headset in person so that I wouldn't have to wait for shipping and would get a chance to use it this weekend before I go back to work, but after going to three Walmarts, four Best Buys and one Gamestop, I asked an employee at Best Buy if there was some way to check if other stores have it in stock that way I could just drive straight there, and they informed me, "No store within 250 miles has it."

And their range is 250 miles, so that does not mean that there is a store 251 miles away that does have it. When I went to the third Walmart, I asked them and they said that no Walmart within 400 miles had it, and I guess that was their range or whatever, and the Gamestop could only give me a 50 mile radius but they said no Gamestop within 50 miles had any.

What the tartar sauce???

The first Walmart I went to told me i just missed it, and that they had one sitting on the shelf for months before it was bought a few days ago, and that stung. But it also meant that these things weren't selling quickly, so it's not like it was out of stock because there's such a high demand for it. You could say that since it was in low-demand they don't keep it in stock, but there's a problem with that--all of their promotional material pushes this thing. Like if you google "Oculus Quest" you'll see Best Buy, Walmart and Gamestop ads, promos and commercials for it, all saying that they have it in stock and want to sell it to you.

I mean, I understand not having a lot of them in stock, but not even keeping one around just because it's advertised that they have it? And even if it takes a while for the one unit to sell, it's no biggie because it will sell eventually, and in my humble opinion businesses should carry something if they spend so much time promoting it. I don't know, I just feel cheated and lied to. I wanted to give them my hard-earned money in exchance for a VR headset so I could play Beatsaber, but that was too much to ask for. Now I have to wait until August 14th for it to arrive via Amazon.

I hope you're happy, Best Buy, Walmart and Gamestop. You've stolen my hopes and dreams with your empty lies.

So I went home, empty handed except for a car charger (I lost mine) and some Carls Jr., with my tail between my legs, and I had to settle for Amazon standard shipping (it was not a Prime product).

Anyway, new post coming up soon, look forward to it!