A Brief Update: Poking my Head into Norman Boutin's Insanity (AKA I read Empress Theresa so you don't have to) 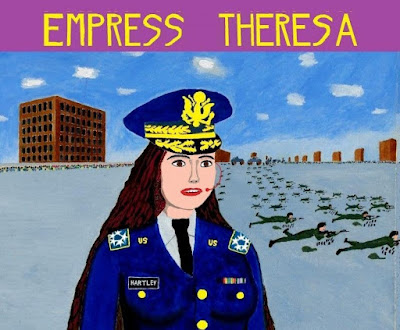 Norman Boutin doesn't live on Earth--or any place resembling it. He lives exclusively in his own universe, a universe where he is the greatest writer on the planet, and his unedited 400-page manuscript is a flawless modern classic that others have to be convinced into liking.

How could it be anything different? He is the main character of the world, after all.

In all seriousness, Boutin is bat-shit crazy.

I'd feel bad making fun of this book if it wasn't for how rude and incapable Norman Boutin was of taking crticism. He's written--and I'm not joking or exaggerating--tens of thousands of angry comments belittling every person who's ever given his book a bad review, or even mildly criticized it / him in any way.

Now, some of you may be thinking, What the hell is that terrifying image above? That there is Empress Theresa, Norman Boutin's """masterpiece.""" Yet, from what I can tell so far, this book is so hilariously bad that it's actually entertaining in its awfulness.

A lot of the reviewers say it's hilarious for a while, but after the first 100 - 200 pages it becomes so unbearable that it stops being funny and just becomes sad and boring.

But, I'm an optimist, and I've been known to thoroughly enjoy awful things ironically, and I love tearing apart bad stories (perhaps even more than I actually enjoy good stories), so here's what I'm going to do.

I'm going to start reading this abomination, and each week (if I have time) I'm going to go over it one chapter at a time, ripping apart and overanalyzing every tiny detail in cruel minutia.

Now, this whole thing needs some context. And I aim to provide that.

But, here's the difference; I know that my first book has a lot of problems and needs an editor to be any good. Norman Boutin, however, insists that Empress Theresa is a perfect masterpiece, and he insults and belittles anyone who even slightly disagrees, calling actual critics trolls after asking for their feedback.

For those who want to go down the rabbit hole, here's all the links. (There's a lot.)

Here's a brief video that summarizes it all perfectly:

This video by kirkpattiecake is how I stumbled on this meme of a book:

Cynical Streams did a FIVE-HOUR livestream roasting the shit out of this book for charity:

A gentleman named KrimsonRogue on YouTube did a 9-part documentary series reading and reviewing this book is extreme detail:

And the creator of the first DownTheRabbitHole video did a 3-hour live reading of the book as well, which I fully intend to listen to:

Additionally, the website for Empress Theresa is about what you'd expect, and I spent a good 45-minutes rifling through this insanity and giggling to myself like a schoolgirl at the absolute absurdity of it.

And there's even an entire wiki dedicated to the author's insane online antics (and documenting all of his lies):

One Amazon reviewer said (paraphrased), I quote, "[Empress Theresa] is not a terrible book, nor is it a bad book. It's actually convinced me of the infinite mercy of God, because anything less than infinite mercy would have struck down this abomination before it was ever released on an unsuspecting public."

He also went on both Catholic and atheist forums to pressure people into reading his masterpiece, and argued with them when they didn't like it, and then he took it to the writing forums, which are hilarious to read about. (You can find those here if you want to read them, it's pretty funny and the first video above only touches the surface of it: https://www.writingforums.com/threads/empress-theresa-what-do-you-do-with-unlimited-power.134037/page-10.)

Stay tuned for when I go over the first chapter of this thing. We're in for a wild ride.